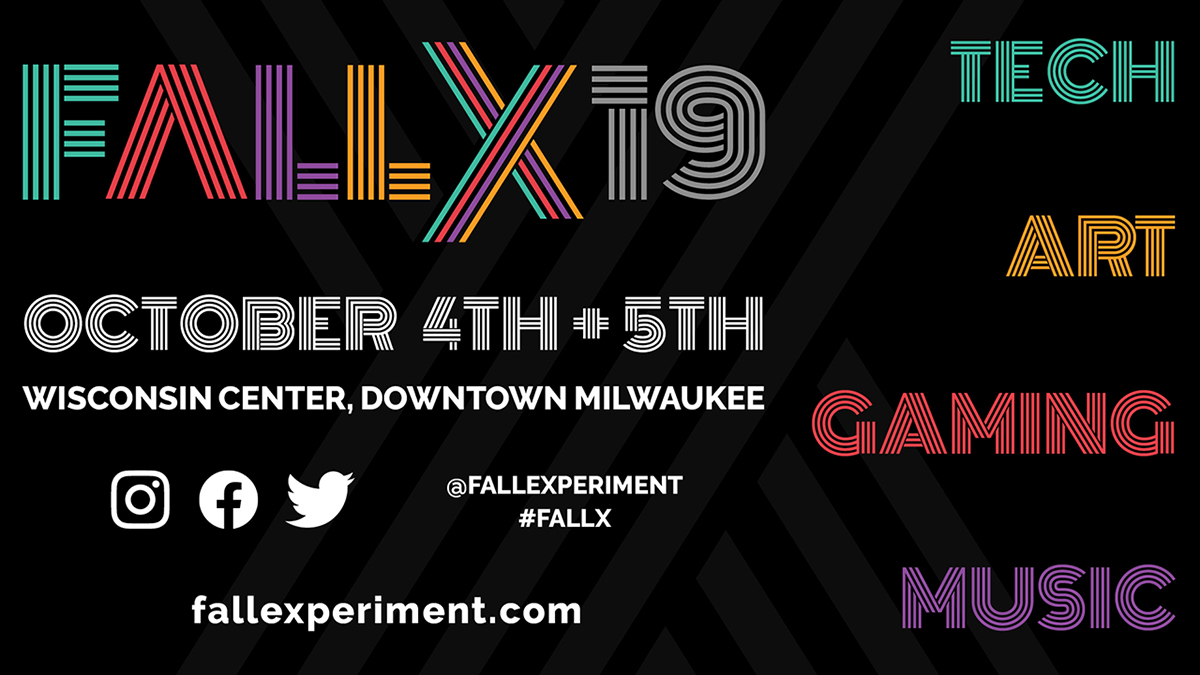 Milwaukee is no longer a Rust Belt, manufacturing city whose fortunes are tied to beer and machinery—though Miller suds and Harleys remain firmly imbedded within the ethos. Today, the city is establishing itself as a welcoming home for digital innovation and disruption.

The number of IT pros in the Milwaukee area has grown over 10 percent the past five years. Industries dependent on a deep bench of tech talent now account for 25 percent of the economic output in the region. Venture capital from the city’s largest corporate citizens is flowing through startups improving water technologies or building on the blockchain.

Milwaukee, in true “Midwestern nice” fashion, has quietly gone about reinventing itself. But that secret is getting out, and the region’s creatives, entrepreneurs, gamers, technologists and hackers will gather to shout the city’s story from the rooftops Oct. 4-5 during Fall Experiment 2019.

If you aren’t familiar, Fall Experiment 2019 (aka FallX19), is an immersive, two-day event that celebrates the multidisciplinary intersections of art, technology, gaming, music and entrepreneurialism. It’s filled with talks from industry thought leaders, e-sports tournaments, virtual reality, pitch sessions and so much more. There’s no way you could take it all in, so FallX19 planners have built custom experiences tailored for developers, gamers, technologists and innovators. Or, if you’re interested in just coming to soak up the spirit of MKE innovation, download the mobile app and be sure to mark these five must-experiences at FallX19.

You may know Arabian Prince (aka Professor X) as a founder of N.W.A., one history’s most influential and groundbreaking hip-hop groups, but that’s just part of this Rock and Roll Hall-of-Famer’s story. Silicon chips and software influenced his musical styles and sparked his interest in gaming and innovation. He’s the founder of iNov8 Next Open Labs, a nationwide effort to expose young minds to technology and nurture their curiosity. During FallX19, you can catch him and 88Nine’s Tarik Moody for a relaxed, fireside chat about innovation, music and more. He’ll also be a panelist for a wide-ranging discussion about building a career in the gaming business (beyond game development).

Do you pwn or do you spend more time getting pwnd? Instead of answering that question, you can let your work on the sticks say everything you need to. If you’re a gamer, you’ll want to carve out some time during the two-day event to show off your Super Smash Brothers, Mario Kart and Rocket League skills. You’ll have opportunities to get in a tournament both days. In between rounds, drop in on one of several speakers dishing on the current state of play in the gaming industry, from the future of music in esports to diversity and representation in gaming. Also, be sure to check out the awesome project from Islands of Brilliance, which built a VR experience that allows you to see a preview of the “Light the Hoan” project. Islands of Brilliance is an experiential design program designed for children, teens and adults on the autism spectrum.

America’s first fighter jet, a Mach-3 aircraft that can out-speed missiles and a spy plane that can snap crystal-clear photos from 70,000 feet high are among the historic projects churned out by Lockheed Martin’s high-speed innovation lab known as Skunk Works. Long before Agile and “leaning in” became corporate mantras, this scrappy assemblage of aerospace engineers mechanized research and innovation to churn out incredible machines at a fast rate and under budget. Nickolas Means, a senior engineering manager at GitHub, will take us back to our roots to teach us how to build amazing things together.

You’ve probably tossed around a few ideas that would make a great business, but have you ever considered stepping onstage into the spotlight and pitching that idea before a panel of deep-pocketed investors? OK, so maybe this isn’t the year for your big breakthrough, but if you’re interested to see how the whole process works, don’t miss the 83 Tech Harbor (83TH) reverse pitch session this year. 83TH, a subsidiary of Advocate Aurora Health, will host five semi-finalist startups who will compete for a six-figure investment in their big idea. Want to go even deeper? Take a look at the reverse pitch rules and application information.

Cream City Code is the largest developer conference in Milwaukee. The event will bring together developers from all skill levels to explore innovative ideas, collaborate and, of course, code! A slate of keynote speakers is on tap, including Kim Crayton, founder of the #causeascene movement aimed at disrupting the status quo in tech fields. She’ll be tackling the often challenging, uncomfortable process of improving inclusion and diversity in technical organizations and communities. However, good intentions without strategy can cause confusion and potential harm. By attending her talk, you’ll get a deep understanding of how to build long-term, impactful strategies that merge good intentions with a real plan that fosters safe, welcoming environments for everyone on a team.